My son and I had been looking at quadcopters for a while and decided it was time to pull the trigger.  The idea was to confirm our interest before spending too much cash and time building a more sophisticated one. 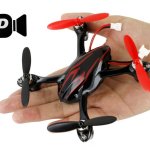 We opted for the Hubsan X4 with the HD video camera for recording flights.  It is a great little quad that can be flown indoors as well as performs very well outdoors.  The video from this little guy is surprisingly good.

This video is from one of the first flights so the piloting is pretty weak.

Don’t let the size fool you these little guys can really go.  In fact the one from the above video has since sailed away.  When a multirotor gets further away you can no longer tell it’s orientation from the LEDs and propeller colors.  When this happens you send it forward to see which way it heads to get orientation and then turn it toward you.  You repeat this process adjusting the heading to get it flying back.

In the case of my fly away I was trying to bring it back, but due to inexperienced piloting it kept getting further away.  Add to that as the copter gets higher the wind picks up pushing the light copter around making it even more difficult to get reoriented.  The X4 became smaller and smaller until it was gone.  The search and rescue mission was a failure so I had to tell my son I lost the copter before he even had a chance to fly it outside.  Amazon Prime 2-day shipping on a new one helped me save face.  Glad we started with a $65 multirotor and not a $400+ one!